Theatre is a human education process 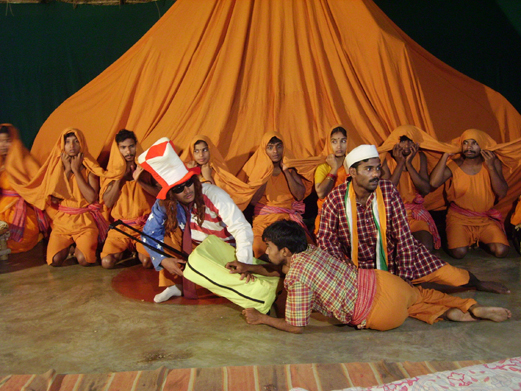 Dear Friends of Theatre and Education,

I am from India, which is a prominent country in south Asian region of the world. India is a country of illiterates, villagers and poor people who are rich in cultural expressions, practical adoption in livelihood and self-dependant life. That is how theatre has existed as a tradition for since more than 300 years of forms, which are still visible. The only complete theatre guidebook has been written in 3rd Century BC named Natya Sashtra. So the existence of theatre in India can be imagined much before that on which basis this classical theories have been derived.

The necessity of inventing theatre was felt as an essential of human life, for which it could sustain by itself undergoing many different improvisations after facing challenges time to time. The necessities could be explained as – a) Theatre is a social reflection process by highlights social conflicts, through an entertainment method to go for an improvement in our society and human life. Conflict between the protagonist and antagonist and at last, by giving a win point for ‘good’ forces against the ‘bad’, establishes the purpose of Theatre. b) Theatre is an expression with a sense of beauty for researching, creating and sharing the artistic achievements, which claims to be an entertainment for building peace and eternal happiness. So ultimately theatre is a social educational process to initiate a thinking of improvement, beyond the students inside classrooms. And Education aims at the same goal : To improve the Human Life and society.

Further when analysing the elements and benefit of theatre : one can discover that –Theatre improves confidence, clarity in vocabulary, sense of logical thinking, power of social-analysis, spirit of teamwork, communication skills etc.  The content of a play always sensitizes the political, social, psychological angle of our lives. These are the basic need of a Human Life.

Natya Chetana has developed 2 modules of theatre process and form. 1) Cyco theatre and 2) Intimate Theatre. One is to carry theatre by cycle crossing hundreds of kilometers to reach common audiences of villages who are out of educational premises and performing in open air spaces facing 3 side audiences after undertaking a serious research on subject and cultural expression of the region. The second model is to do longer plays, 1 hr 15 min to 2 hours maximum, performing once in the evenings with a series of shows for urban population in towns using auditoriums, non-auditorium unusual spaces addressing One-sided audiences. The objective is to draw attention of the audiences towards the issues dealt in the content, but places before them through a familiar entertaining method.

Natya Chetana has record of results:  Audiences sit down and discuss for a change. Silent poor people start raising their voices against antagonists. Children start questioning teachers in their schools. Natya Chetana conducted a special project in 1994-1996, to make tribal students confident and become interested in education. As a successful indicator, the poor people decided to continue the Children Theatre Centres of their villages by own contribution after the withdrawal of Natya Chetana from that region. The private tuition by school teachers was vanishing there.

That is how Natya Chetana believes Theatre as an integrated part of Education which improves Human Life. Nobel prize(1913) winner Rabindranath Tagore (as a poet) established the same believe through his institution at Shantiniketan during 1913 onwards. But this believe turned down by the modern school system and theatre became side tracked for which Natya Chetana is worried about. The present concept of Theatre in Education is a new idea for present day schools in India.