Feedback from the Francophonie Summit 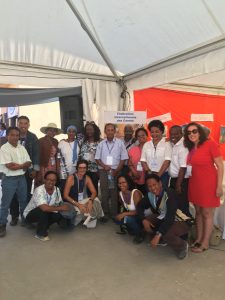 26 and 27 November 2016 will be remembered as a major victory for supporters of high-quality public education. At the summit in Madagascar, the 57 Member States of the International Organisation of La Francophonie adopted the Antananarivo Declaration which explicitly refers to the the problems associated with the commodification of education. This is the strongest statement ever made by heads of State against  commodification and in support of public education and regulation. It is a sign that efforts by civil society actors to raise awareness on the matter amongst State representatives and international bodies have been successful. It also shows how important all of our joint efforts in recent months have been.

The declaration included the following paragraph  “Recognising the development of commercial schools and educational institutes and supporting high-quality public education provided free of charge to everyone, we call upon the IOF and the  Conference of Ministers for Education in the States and governments of the Francophonie (Confémen), in cooperation with civil society, to continue the discussions started at the Kinshasa Summit (2012) and to take measures to promote effective institutional mechanisms for regulating private actors in the education sector in order to guarantee the quality and fairness of education services.”

Whilst the fact that so many Heads of State expressed such a clear position on the issue is an important step in itself, it is now essential that national authorities are held accountable for the implementation of this declaration.

Commodification of education – a multifaceted process

In recent years, the international community has witnessed unprecedented growth in the role of private actors in the education sector, with the result that education systems have been totally transformed in both the “South” and in the “North”. This also includes actors offering low-cost, poor quality services which target emerging and poor countries. Many investors, and multinational companies in particular, are involved on a large scale in the highly lucrative education “market”. The commodification of education is an insidious process that takes various forms and impacts both the formal and non-formal education sectors. It results in business ventures offering academic support, study coaches, ready-made “kits” for coping with dyslexia or dysorthographia, “educational” digital software etc.

This multifaceted phenomenon impacts the quality of educational content and knowledge acquisition. It leads to segregation between different areas of countries and different socio-economic groups, further widening social inequalities. As a result, it puts the right to education itself at risk.

Three major consequences can be identified:

Combatting this commodification is a major challenge for all involved in defending the right to education for all, throughout life.

It is in this worrying context that a group of non-governmental organizations, trade unions, researchers and educational movements, including the Fédération Internationale des Ceméa, have created an international consortium to reflect on and take action on this issue. These actors are coordinating research and advocacy activities and also working on a methodology to identify the impact of privatization on human rights.

The Francophone members of this consortium have written a joint appeal from civil society that speaks out against the commodification of education and education systems. The text aims to alert public authorities and civil society actors to the issue and to raise their awareness of the inherent dangers connected with this process of commodification of education. It also urges them to take action to counter this process.

Today, our Appeal Against the Commodification of Education was signed by 302 civil society organizations from 38 countries.

This appeal now needs to be passed on, heard and debated. States, regional institutions such as the European Union and the African Union must, like the UN[2] and the IOF, protect and boost education as a genuine public good, and promote a vision of education as a driving force for individual, collective and social empowerment.

At national level, we have to call upon the various ministries in every country to take action, mobilize actors involved in educational matters and make proposals because the solutions exist.

We are able to link the local and international levels that are at play in our democracies. International policy guidelines should not be controlled by experts and technocrats alone. They are part of the public debate and must not be disconnected from everyday realities. Our role as actors on the ground and educators is to work with people on these fundamental issues. We must enable citizens to take ownership of national, regional and international policies in order to participate in the debate, understand the issue and be able to act on the policies that shape the future of our societies.

Education is not a commodity it is a right! We want every individual to be able to exercise it.

The mission of the International Organization of La Francophonie (IOF) is to embody the active solidarity between its 84 member states and governments (58 members and 26 observers). It is a community that shares the same destiny and is conscious of the links and potential that come from sharing a language, French, and universal values.

The IOF aims to improve the living standards of its populations by helping them to become actors in their own development. It provides member states with support to develop or consolidate policies and implements international policy and multilateral cooperation activities, in accordance with the four main missions adopted at the Francophonie Summit:

Télécharger au format PDF
Posted in Commercialization of education, In the media